Assisi Italy
Small Town and the Birthplace of Many Italian Saints

Assisi Italy is a small town in the Umbria region, in the centre of the Italian peninsula. It resides in the Province of Perugia and is a treasure trove of historical landmarks, stunning architecture, and beautiful landscapes. Many famous saints and others hail from this small town. Among them are St. Francis who founded the Franciscan religious order, St. Clare - the founder of the poor sisters as well as poet Propertius. Moreover, the entire town of Assisi is was declared a UNESCO World Heritage Site in the year 2000.

St. Francis - who is a beloved Catholic Saint, founded the Franciscan religious order in 1208. Visit the Basilica of Saint Francis of Assisi which is a vast structure that dates back to the twelfth century. The tomb of St. Francis is also located here. This medieval basilica is not only a historical landmark; it is a place of pilgrimage for many Christians and home of many priceless paintings and frescoes. Other places of note to visit here include The San Rufino Cathedral or the Assisi Cathedral. This Romanesque building boasts three rose windows. This is where St. Francis and St. Clare were baptized. Further down the road is the church St. Mary of the Angels or Santa Maria degli Angeli. This church houses the famous Porziuncola which is a small stone structure that was said to be the home of St. Francis and his followers.

St. Clare is another saint of this town. She is an important woman in the history of the Catholic Church, and you can visit The Basilica of St. Clare in Assisi. This structure has an ornate white and pink façade and features the Crucifix of San Damiano. St. Clare is buried in the thirteenth-century crypt there.

If you love castles, be sure to visit the Rocca Maggiore which is a fourteenth-century castle with breathtaking views of the surrounding landscape. And if after all that sightseeing you find yourself hungry, be sure to check out the local shops that feature regional specialties. Umbrian meats, especially cured pork, pasta, and chocolates are amongst the goodies you will find here. There are also many local artisans selling ceramics, religious figures, and medieval weapons. You will also find a fine selection of leather goods such as belts, shoes, jackets, and purses for purchase in the shops of Assisi.

Assisi Italy is a charming town that is well worth a visit. Whether it’s the birthplace of the saints you seek or just a touch of authentic Italian food and wares, Assisi has it all right here in the heart of Italy.

The Assisi railway station makes travel in and out of this town a breeze. It has been in operation since 1866 as part of the Foligno-Terontola railway system. The station is located southwest of the city centre in at the Piazza Dante Alighieri. The station boasts about 800,000 passengers each year and has one platform.

Most of the trains are regional, but they also have intercity trains to Milan. Regional trains run to places like Rome, Florence, Terni, Terontola-Cortona and Perugia. Refer to the Italy train map for an overall glimpse of the country's railway system. 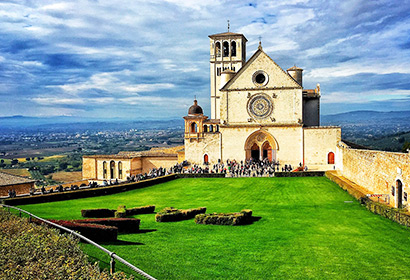