Campania Italy
Enjoy a Southern Gem of an Italian Region

Campania Italy is a region in the southern part of the peninsula and it's the third most populated region of Italy. Population of La Campania was 5,820,000 in 2018 and Naples is its capital. Numerous must-see attractions and historical sites can be enjoyed within the Campania region borders, such as Pompeii & Herculaneum, Mount Vesuvius, the Amalfi Coast and the island of Capri. When visiting Campania Italy, rest assured that with their vast amount of popular spots favoured by many travellers - finding one that's right for you will not be a problem.

The name Campania translates to "fertile countryside” or “happy countryside” and it's no wonder that with its warm, Mediterranean climate - this region is the one of most visited in all of Italy. There are five provinces here, and each one offers vacationers a unique glimpse into the history and culture of the coast of Amalfi - Campania region and surroundings.

Naples is a city that simply cannot be missed when visiting province Campania in Italy's south. This is the third largest commune in the country, and the historic city centre of Naples remains to be the largest in all of Europe. Furthermore, the capital of Campania region has been designated as a UNESCO World Heritage Site like many other destinations in Italy.

Looming across the landscape over Naples is the famed Mount Vesuvius. This stratovolcano erupted in 79 AD and buried the cities of Pompeii and Herculaneum. Today, you can climb this legendary volcano and take a peek inside its crater. If you’d like to visit the city of Pompeii, you can also take a tour through the ruins of the city. It is well preserved due to the layers of ash from the volcanic eruption. You can also visit the city of Herculaneum which is said to be even better preserved than Pompeii. Walking through the ruins, you will notice some of the wooden framing, roofing, and structures in Herculaneum remain in good condition.

The Amalfi Coast is a breathtaking area of the region which stretches from Naples to Salerno and is also designated as a UNESCO World Heritage Site. It is world famous for its gorgeous scenery and coastal towns, the perfect setting to enjoy some delicious Campania food. Rest assured, there are many colourful local cafes, bars and amazing Campania restaurant choices for every tastebud.

Be sure to visit the seaside villages, or "villaggi Campania" - which feature colourful houses built right into the hillside. If you want to visit the island of Capri and enjoy crystal clear water, paradise like settings and of course Grotto Azurro (the Blue Grotto) which simply put, is what dreams are made of. Be sure to check out the spectacular beaches which are blended in flawlessly amongst breathtaking rocky cliffs. You can easily plan a day trip to this island in Campania Italy with the many tour companies and ferries available in the area.

Province Campania is a true southern-Italian gem. It combines some amazing cultural and historical landmarks. Let us not forget the mesmerizing scenery carefully bathed in the pleasant - moderate climate, enjoyed in the area for most of the year. For those who enjoy Farmstays while soaking up the local rural culture, try Agriturismo Campania - an experience you won't forget.

Below you'll find a map of Campania Italy with train stations, popular attractions, lodging options, other transportation options and much more. When wanting to purchase a paper map from a local store, simply ask for "Campania cartina".

Train travel in and around  is made easy with la Campania Express train which is a specialized line for that runs between Naples and Sorrento. If you want to stop more frequently try the Circumvesuvia line which connects Naples, Pompeii, and Sorrento.

Naples has its own train station - the Napoli Centrale, which is the main railway station for the city. It offers High-Speed, night service, Intercity and regional service to areas such as Milan, Florence, and Rome as well as some smaller Italian destinations. 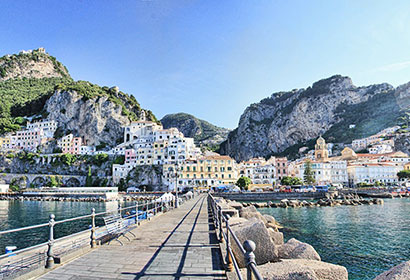 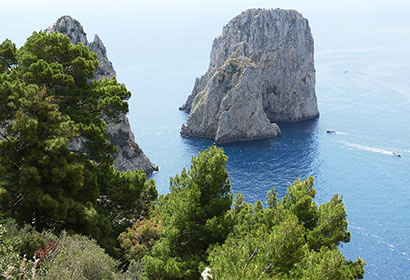