Gallipoli Italy
Ancient Town in the "Heal of the Italian Boot"

"Beautiful city" is the Italian form of the Greek name for the southern town of Gallipoli Italy - and it couldn’t be more aptly named. This gem of a city which used to be part of Ancient Greece is located in the province of Lecce in the region of Apulia (or Puglia) and has a population of just under 32,000. Gallipoli is situated by the Ionian Sea on the west coast of the Salentina Peninsula. The town is divided into two parts. The modern section which contains skyscrapers and other new buildings and the old section is situated on an island which is linked to the mainland by a sixteenth century bridge.

Walls and bastions surround the old town and were built in the fifteenth century to keep it safe from attack. In the nineteenth century, they were modified to allow in the breathtaking views of the port, harbour and surrounding seas.

The port in Gallipoli Italy is also worth a visit. Here you can watch as fishermen bring their boats in and out of the harbour. There are also some excellent seafood restaurants here. And if you are feeling really daring, try the sea urchins which are a trademark dish in Gallipoli.

If you love castles, take a wander to see the Castello Angiono. It is near the old town and is a fortress which was initially built in the thirteenth century by the Byzantines. It was modified in the fifteen century and once guarded the old port.

Gallipoli Italy even boasts its own golden sandy beach, the Spiaggia della Purita. It is the perfect spot to stop and relax after a busy day of sightseeing. Here, private boats can dock in the tourist harbour.

Gallipoli has a treasure trove of historical landmarks, lovely scenery and authentic Italian cuisine. Because of its southern location, it is considered a year round tourist destination. However, the most popular season with good weather is from May to October. There are also several festivals held throughout the year including Easter Week and Santa Cristina in July. But whatever time of year you visit, you’ll be sure to make memories in Gallipoli that you won’t soon forget.

Gallipoli boasts it’s very own train station for easy travel in and out of the city. The Gallipoli Railway Station is operated by Ferrovie del Sud Est and is situated on the Zollino-Gallipoli and Gallipoli-Casarano railway. It offers local services to Lecce, Zollino, Nardo and Casarano.

If you are unable to take the train, the nearest airports are Bari and Brindisi. There is also a modern freeway that runs in and out of the city. Below is a map of Gallipoli to help with planning your vacation. Refer to the Italy train map for an overall glimpse of the country's railway system. 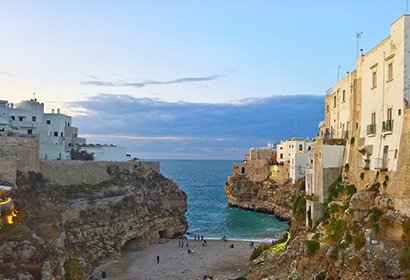