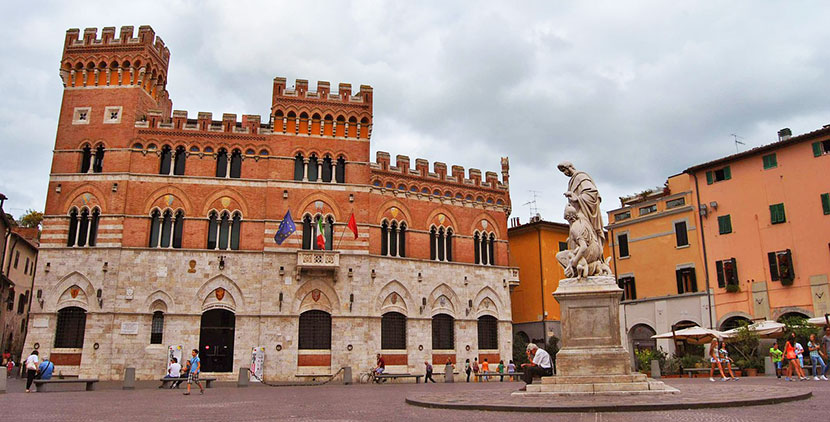 Grosseto Italy is a city in the Tuscany region. It is located in the Maremma western coastal region of the country and is nine miles from the Tyrrhenian Sea. The climate of Grosseto is considered temperate and warm. The hottest month in this city is July with the coolest month being in January. Rainfall is more plentiful in the winter months.

If its historical sites that you wish to view in Grosseto, you won’t be disappointed. Near the center of the city in the old town are the remains of the Medicean Walls many of which are in good repair. You stroll along the walkways next to the walls and marvel at the separation of old town and new town. Historical churches and cathedrals are also plentiful in Grosseto. The Grosseto Cathedral is a Romanesque structure with a black and white marble exterior. The interior is also stunning and contains artwork such as a baptismal font which dates back to the 1470s. Other churches include the Church of San Francesco, Convent of Clarisse and the Church of San Pietro.

Other sites of note include the Bastione Cavallerizza which was built in the sixteenth century. Not only is the bastion impressive, but it also has a garden along the pedestrian pathway. The Palazzo Aldobrandeschi is also worth a look. It was initially built in the Gothic style in the Middle Ages, but it became a Gothic Revival when it was rebuilt in the nineteenth century. This decorative building is divided into four main sections and boasts four towers. The brick and travertine exterior is a sight to behold. Today the building serves as the headquarters for the Province of Grosseto, so it is in a very well preserved.

Once you’ve had your fill of historic sites, you might want to check out The Museum of Natural History of the Maremma. It is conveniently situated in the historic center and has three floors worth of exhibits as well as educational and scientific activities. If you are traveling with children, this museum will be of interest to you as it has many activities for students.

If you want to see the best of natural Italy at its best, take a trip to Maremma Regional Park. Here you can hike on forest trails or cycle in amongst native trees, plants and flowers. This outdoor space is a peaceful and relaxing way to unwind after a busy day of sightseeing.

Grosseto Italy is a city that has much to see and do. From the historical sites to natural parks and nature museums, this unique part of Tuscany offers vacationers something for everyone.

Train travel to and from Grosseto is made possible by the four different train stations. The main station is called the Stazione di Grosseto and it serves the city and the surrounding area. The station is located in the Piazza Guglielmo Marconi which is close to the center of the city.

Trains run to and from Rome, Milan, and Venice among other destinations. Other train stations in Grosseto include Montepescali Station, Albrese Station, and Rispescia Station. Refer to the Italy train map for an overall glimpse of the country's railway system.