Italy weather is region dependant and one can expect many things including sunny skies, warm & salty breezes, mountain-crisp air, dense fog, booming thunderstorms and much more. In a normal Italian climate - all of these are possible and largely depend on where you are, time of year and altitude. The weather here mainly falls into 3 geographical zones:

Use the Weather Network's tool to get an idea of temperatures from south to north by looking at Palermo, Naples, Rome, Florence, Milan and Bolzano. Below, you'll find current Italy weather for the peninsula's northernmost & southernmost points as well as the country's middle.

The massive boot jutting out of Southeastern Europe happens to be geologically - very diverse and Italy climate can really fluctuate. One might experience a broad range of Italian weather conditions depending on when you travel, where and how high above sea level. 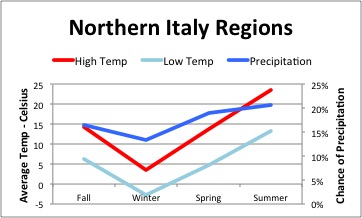 Northern regions are very mountainous and can experience harsh changes in Italy weather. Winters here can be quite cold, damp and snowy - depending on your altitude. On the bright side, this promotes of the the best highlights of Italian climate - the most perfect winter sports weather conditions. Few months later - summers in this region, are often the opposite - they can be hot and very humid.

Northern Italy can sometimes show us the dramatic Italian weather with thunderstorms & lightning - especially in early and late summer. If you plan on visiting a city in northern Italy, such as Milan, Venice, Turin or Bologna - be sure to pack warm clothes and jackets in the winter season. You'll want to bring cool summer clothes with you for the summer months, but it's never a bad idea to pack an umbrella. Towards late summer - beginning of fall, this region can experience quite a bit of rainfall and sometimes flooding. It's a good idea to come prepared for the sometimes tricky Italian climate. 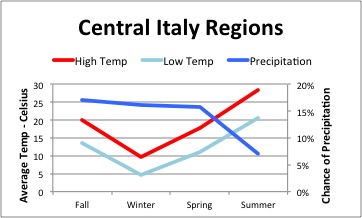 Central Italy is largely made up of 4 of the twenty regions: Lazio, Abruzzo, Umbria & Marche and include their capital cities - Rome, L'Aquila, Perugia & Ancona respectively. This central region as well as Tuscany experiences a more stable climate throughout the year. Temperatures do not fluctuate as greatly as they do in the north and the winter seasons are milder & shorter, resulting in longer - warmer summers. 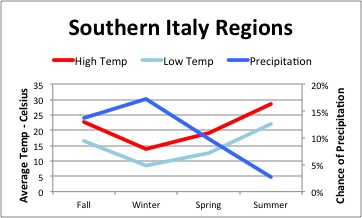 Just to mention a few of the most sought-after destinations in Southern regions of Italy which boast some of the country’s warmest temperatures and most beautiful beaches are the Amalfi Coast, Naples, Sorrento, Palermo and Catania. The climate in this region is the warmest throughout all of Italy, with spring and fall temperatures often matching the summer temperatures in the North. This area has the most sun of anywhere in the country and least amount of rainfall. If touring to southern Italy, be sure to pack sunscreen & a bathing suit - or two!

Italy’s diverse climate has something for every traveller. Hot - tropical climates for the sun seekers, cooler - moderate temperatures for those not liking the heat, and even perfect conditions for the winter sports enthusiasts. Being aware of Italy’s diverse climate and packing accordingly will make your trip here even more enjoyable. 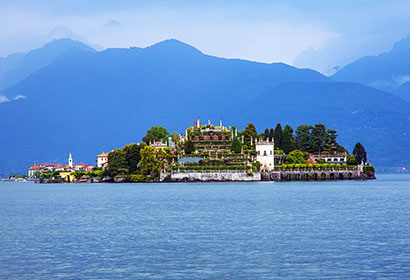 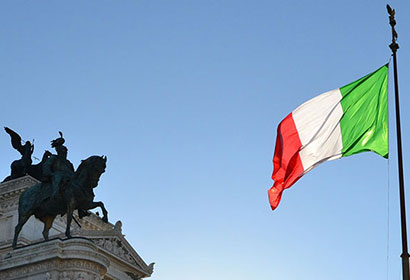