Liguria Italy is a crescent-shaped coastal region in the northwest of the country. Its capital city is Genoa. The Mediterranean coast of this region is known as the famous Italian Riviera. This region is very popular for vacationers and boasts beautiful beaches, historic towns, and authentic local cuisine. Liguria is divided into four provinces and is bordered on the west by France, Piedmont to the north and Tuscany and Emilia-Romagna to the east. Its coastal area lies on the Ligurian Sea. Although most known for its beaches, this region also contains part of the Alps and the Apennines mountains.

Genoa is the capital of Liguria Italy, so no visit to this region would be complete without seeing it. This Italian port city on the Ligurian Sea is an important seaport for the country and is the busiest in all of Italy. The city of Genoa bears the nickname la Superba which means “the proud one” due to its collection of historic landmarks. A section of the old town was declared a world heritage site by UNESCO in 2006.

If historical sites are on your agenda, be sure to visit the Piazza De Ferrari which is located in the old town and has a beautiful fountain. This area also has buildings of note which include the Palace of the Doges, The Palace of the Duke of Galleria, and the Genoa Stock Exchange. The Palazzi dei Rolli is also worth a visit as it part of the UNESCO World Heritage Site. If cathedrals you seek, don’t miss the San Lorenzo Cathedral. It contains what is said to be the Holy Chalice. The Spianata Castelletto is an area of the city with raised platforms affording you a breathtaking view of the city and the harbour.

If it’s more quaint and charming settings that you had in mind for your visit to this region, be sure to visit The Cinque Terre which means five lands. These five scenic fishing villages which include Corniglia, Manarola, Monterosso al Mare, Riomaggiore, and Vernazza are part of a UNESCO World Heritage Site and feature vibrant, colorful houses and lush vineyards built right into the side of the jagged cliff sides along the Mediterranean. Here, the harbors are abounded with fishing vessels and the seafood is delectable.

Sanremo is another coastal city in this region that you might want to add to your agenda. This city boasts many interesting sights including the park of Villa Ormond, the San Siro Cathedral and the Casinò di Sanremo.

The region of Liguria Italy is steeped in historic landmarks, green spaces, and charming local sites. Whichever area you choose to visit, you won't be disappointed with your travels to this region.

Train travel is made easy for travelers in and around Liguria Italy. The Ventimiglia-La Spezia line brings in vacationers from the north part of Italy. The Savona-Genoa line connects passengers with Turin.

The Genoa route services Milan. Liguria also has several international routes which travel to Nice, Germany, and Eastern Europe. There is also regional service for travelers within the area. Refer to the Italy train map for an overall glimpse of the country's railway system. 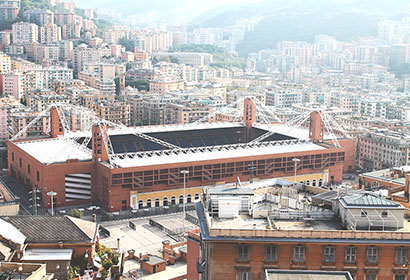