Matera Italy is an ancient city located on a on a rocky outcrop and includes an area called the Sassi which is a complex of cave dwellings carefully carved into a river canyon. This complex was evacuated in 1952 because of poor living conditions and the population was moved to modern housing. At present day, Sassi is home to museums like Casa Grotta di Vico Solitario, beautifully decorated with antique furniture and local artisan tools. The city of Matera is located in the beautiful southern region of Basilicata.

The area of Sassi di Matera is considered one of the oldest inhabited cities in the world where over many centuries it was occupied by Greeks, Romans, Longobards, Byzantines, Saracens, Swabians, Angevins and Aragonese just to name a few. Even outside of this ancient area the whole surrounding enjoys a unique setting. The landscapes vary here from mesmerizing sea views, lush hills, and incredible mountain tops that sweep down to the crystal-blue waters of the Tyrrhenian and Ionian seas.

If you love basking in the sun, you will love this area as it boasts over 20 beautiful, white-sandy and pebble covered beaches. For the explorer in you, there are plenty of coves to explore on the amazing stretch of the 30 km coastline, most of these are only accessible by boat. One beautiful example of this natural beauty is La Grotta delle Meraviglie - and the best part is that it is the only cove that is discoverable by foot. The abyss of this cave is simply mesmerizing and boasts some amazing stalactite & stalagmite formations.

Maratea Italy is also known as the ‘Cannes’ of Southern Italy. There are many luxurious villas around its stunning harbour which serves as a popular retreat spot for many famous celebrities. Every year in August, the city hosts a prestigious International Film Festival with world famous actors, directors, writers and other top billing crew in a huge gathering, celebrating the art-form of filmmaking.

The colourful houses and villas aren't the only structures you will see here amongst the perfectly set surroundings. There are 44 beautiful churches here and to discover them all, you will have to do quite a bit of walking. No matter the activity you choose here, rest assured - you will be left with long lasting and beautiful memories of your Matera vacation.

Although Matera Italy does not have its own railways station, there are couple in the are that will bet you in the vicinity of this Basilicata city. The two closest stations are Gioia del Colle and Ferrandina which offer slower regional trains as well as intercity service. From those stations and you can car-hire or take the bus from to reach your destination. Refer to the Italy train map for an overall glimpse of the country's railway system. 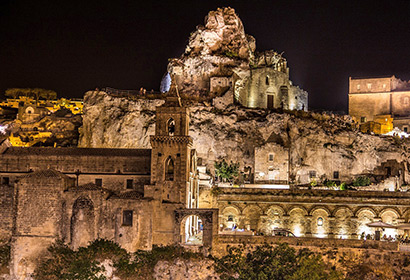