The Republic of San Marino is a completely independent state, surrounded by Italy. It has its own government and laws although it is only 61 square kilometres in size. San Marino population is only 33,400 people according to 2017 statistics. It was founded in the 4th century BC and is the world’s oldest republic. Dripping with old world charm and a rich cultural heritage, this region is a popular sightseeing destination. With so much to do and see in and around San Marino City, no Italy trip would be complete without spending some time exploring the vicinities.

Starting from May and going right through September, you are likely to experience pleasant San Marino weather with average temperature in the mid 20s celsius, with the hottest month being August. Middle fall through the end of November usually sees quite a bit of precipitation with lower temperatures and even cooler during the winter and into early spring.

Built high on the rocky cliffs of Mt. Titano - Guaita Fortress stands tall, its three towers looking out over the countryside. It offers spectacular views of the Adriatic Sea and everything in between. Visible throughout San Marino Italy as well as its mountain tops, are many other smaller castles & fortresses - and Mount Titano offers a view of all of them.

The Guaita Fortress was constructed in the 11th century and has been used as a prison as well as a lookout point. Steep steps lead up to its top but it is well worth the climb. Along the ridge of Mount Titano - are situated the other two castles also and all three structures are joined by a rocky, walking path. This path is known as the "Witches Passage" or Passo delle Streghe. 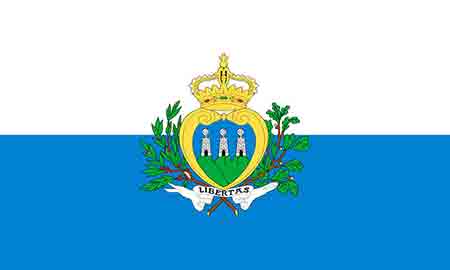 The State and war Flag of San Marino is made up of two equal horizontal bands, white on top and blue on the bottom. Blue symbolizes the blue sky, and white represents the snow covered caps of Mt. Titano - the republics highest point.

The national coat of arms is located in the centre of the flag and it depicts a shield featuring 3 towers on 3 mountain tops. The coat of arms is topped off with a closed crown, is flanked by a wreath and a scroll below. The San Marino flag was adopted officially by the republic on April 6, 1862.

San Marino City - the capital of San Marino may be small in size but it contains numerous museums that will be appealing to any history buffs visiting the area.

Visiting the City of San Marino and the rest of this mountainous microstate could prove to be a wonderful addition to your Italian itinerary because it is filled with many interesting sites to see and things to do. It is sure to impress, with its stunning panoramic views of the hills and valleys surrounding it. We are sure that your trip to the San Marino country will be one to remember for a lifetime.

Below you'll find the map of San Marino & vicinity with nearby train stations, bus service, popular attractions, lodging options and much more. Where is San Marino exactly? - It's located in the Emilia-Romagna region of Italy close to the Adriatic Coast town known as Rimini which is known for shallow waters and beach-side nightclubs.

Although this destination is not reachable by train, there is an excellent bus service which will take you here from Rimini, which is accessible by train. It's about a 30 minute bus ride from there to the destination. For more information and the exact location of the train station and bus stops, use the handy San Marino Italy map below. 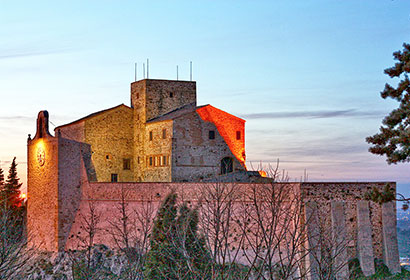